You are here: Home | What is Scoliosis? 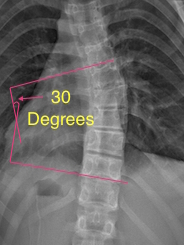 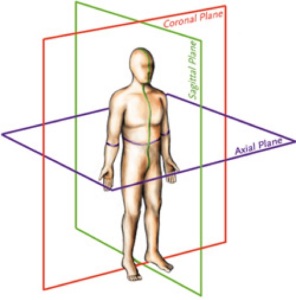 Scoliosis is a three dimensional medical condition in which the spine deviates in in all three planes of spinal motion (sagittal, coronal and axial).

Scoliosis can be congenital (caused by a spinal malformation at birth), idiopathic (cause which is unknown) and neuromuscular. Idiopathic represents approximately 80% of all cases of scoliosis, it is further classified as infantile, juvenile, adolescent and adult, which is based on when the onset occurred. Neuromuscular and congenital causes can be vast, and an extensive case history, neurological examination and radiology are required.

A scoliosis can present in an x-ray as a deviation that resembles an S or a C, rather than a straight line. The magnitude of this curve is then measured, which is referred to as a Cobb Angle – Figure 2. 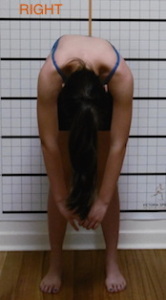 A spinal curvature with a Cobb Angle measurement greater than 10 degrees is considered a scoliosis, curvatures below 10 degrees are considered spinal asymmetries.

Figure 3 shows an example of a scoliosis curve. As the spine side-bends to one side, in the case of Figure 3 to the left, the spine will then consequently rotate to the right. This principal is one of Fryette’s laws. Fryette was an Osteopath who developed the principles of spinal mechanics in 1918, to classify dysfunctions in the axial skeleton. These principles are applied to the treatment of scoliosis.

A further test known as the Adam’s Forward Bending Test is used to measure the angle of trunk rotation, this measurement is related to the size of the Cobb Angle.1 Performing this test at regular intervals allows for ongoing monitoring of the curve in conjunction with x-rays.

An x-ray of a scoliosis was traditionally reported as a C-Curve or an S-Curve. A C-Curve is also referred to as a 3 curve and an S-Curve is also referred to as a 4 curve. The scoliosis curve pattern in each individual is classified based on the number of curves present and the location of the curves within the spine. The Lehnert-Schroth augmented classification system (Figure 5) is used to prescribe Schroth Method exercises according to the individual’s curve pattern.

Each curve can either be structural or functional. Structural curves display as a change in the structure of the vertebrae at the apex of the curve.

Figure 6 shows how the vertebrae at the apex of the curve demonstrates some wedging. This is not present in the other vertebrae. The functional curves are the curves above and below the structural curve. They are only present to balance/level out the spine in an attempt to keep the head aligned over the centre of the pelvis.